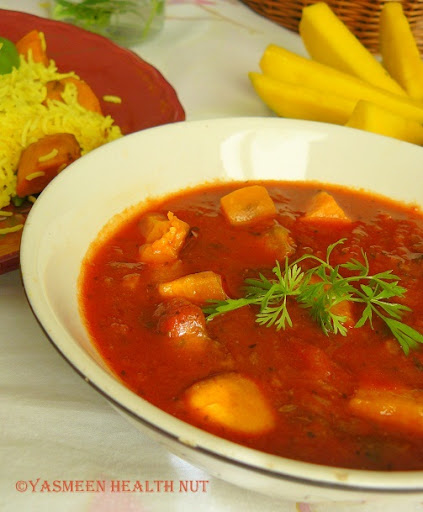 We are talking Soccer and South African Cape Malay cuisine in this post.

If you are a soccer fan,you might already know South Africa is the honored host of World cup Soccer 2010.Soccer runs in my family,I was no Mia Hamm,but was deeply influenced by the game from my daddy dearests soccer passion.He had immense skill at the game, played for his school team,that gave him an athletic persona.He continues his passion ,follows the world cup series closely.I remember the nights he stayed awake ,when the world cup games were aired at odd mid-night hours.The passion is passed on to my son Nabeel,who is beginning to show interest in the game.I get the title of soccer mom,for being there for all his games,rain or shine.I also love practicing the game with him,not to mention,gives me a good work out. 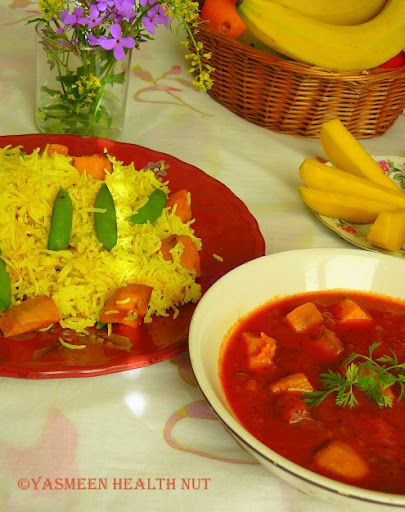 Now, to be good at the game,a well-balanced meal is essential.That brings us to the recipe of the day.Bredie,a luscious slow cooked tomato and lamb stew,one of the most favored dishes of the South African Cape Malay Cuisine,that is rich in protein and has good serving of vegetables.Bredie is best devoured with Yellow rice(brown rice preferably) and stir fried vegetables on side and some fresh sliced mangoes for a sweet finish.A meal that my daddy dearest would wholly appreciate.I know he is watching his cholesterol and is low on red meat,which is why I use lean meat for the recipe with vegetarian alternative.


Cape Malay Cuisine
With their soft, caramel skins and wide smiles, the Cape Malay people are a prized and proud element of the South African culture.
The first group of Malaysian state prisoners landed on the shores of South Africa from Java and the neighboring Indonesian islands in the late 1600's. Many more followed in the years 1727 until 1749. Not only did this proud and attractive people bring with them the Muslim faith and fine architecture, they also brought with them a unique cookery style, introducing exciting mixtures of pungent spices that has had a heady influence on traditional South African cuisine. Indeed, the Malay-Portuguese words such as bobotie (a curried ground beef and egg custard dish), sosatie (kebabs marinated in a curry mixture) and bredie (slowly cooked stews rich in meat, tomatoes and spices) are integral in our cookery vocabulary.
-Meryl Grebe(a South African Food publisher at inmamaskitchen.com.)

*Vegetarians could use 2 cups of Soy nuggets(available in Asian stores),lessen the cooking time.

Method
Trim any excess white fat from the meat.
In a heavy bottom skillet or pressure cooker,heat the oil,saute the onions until lightly colored,5-6 minutes.Add the fresh minced garlic,ginger and rest of the dry spices and salt,after a minute,add the meat and 2 cups of water.Cover and let cook for about an hour in the skillet or 25 minutes in the pressure cooker ,on medium low heat until meat is tender.
While the meat cooks,roast the sweet potatoes or yams,in an oven until tender.Keep aside.
When meat is tender, stir in the tomato sauce,roasted sweet potatoes and simmer for 4-5 minutes.Garnish with fresh herbs.Serve warm with brown rice or whole grain flat bread. 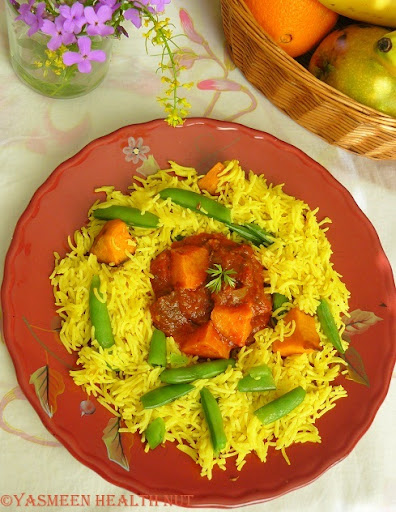 Unknown said…
Yasmeen, the colors of your pics are so beautiful. A great click is always very inviting.
May 5, 2010 at 8:04 AM

Kiran said…
Very beautiful clicks.Nice to know the vegetaian varaiation for the recipe.
May 5, 2010 at 8:34 AM

Anonymous said…
Great to learn about Cape Malay cuisine and this specialty look wonderful!
May 5, 2010 at 8:54 AM

Joanne said…
I've never watched very much soccer, but I'm all over this delicious dish nonetheless! It looks like it has a ton of flavor.
May 5, 2010 at 9:57 AM

Simplyfood said…
Beautiful stew with awesome colour.Eyecatching clicks too.
May 5, 2010 at 12:06 PM

Sarah said…
You go Soccer Mom! My bro. is a crazy soccer fan.Bredie looks a lot the one my mom used to make,a little less spicy and no veggies.I like yours with yams =)
May 5, 2010 at 3:39 PM

Raks said…
Its looking really appetizing,feeling like having a plate right now!
May 5, 2010 at 7:51 PM

Gita Jaishankar said…
Wow Yasmeen...lovley platter, it looks so good...I have bookmarked this...may be I could even try a vegetarian version for my husband :)
May 6, 2010 at 5:20 AM

Ayesha said…
How are you Yasmeen? Visitng after a long time.Blog looks so much prettier.The stew with rice and vegetable is truly a complete meal.

Shabitha Karthikeyan said…
New one to me..Simply loved the presentation..pics are awesome..clicked like a pro..
May 6, 2010 at 10:37 AM

Anonymous said…
Well done is well-advised b wealthier than comfortably said.
May 9, 2010 at 3:57 PM

Anonymous said…
Artistically done is better than comfortably said.
May 9, 2010 at 6:20 PM

Anonymous said…
Lovingly done is richer reconsider than extravagantly said.
May 9, 2010 at 8:44 PM

Anonymous said…
This looks great! A nice dish to enjoy while watching the game. Thanks for sharing!
My blog celebrated Africa Day with a collection of recipes from across the continent. I would love your thoughts. http://www.caseyangelova.com/2010/05/lets-celebrate-africa-day-2010.html
May 25, 2010 at 2:24 AM