Posted by Yasmeen on August 31, 2009
The Walima Cooking club celebrates Iraqi cuisine for the month of August with 3 palatable delicacies(one savory and two sweet).Thanks Arlette for the delectable picks.

Iraqi cuisine
Iraqi cuisine or Mesopotamian cuisine is Iraq's traditional cuisine developed since antiquity in MeMesopotamia (Sumer, Akkad, Babylonia, Assyria). It is considered one of the oldest kitchens.
As Baghdad became the centre of the Abbasid Caliphate during the Islamic Golden Age, Muslims and other scholars from many parts of the world came to visit, live and study in Iraq, which gave the Iraqi cuisine new twists to its food. This is most commonly seen in the greater use of spices (e.g. Saffron) used in the Iraqi cuisine in comparison to other Arab cuisines.
Iraqi cuisine has absorbed influences from all the neighboring countries and has much in common with Levantine, Persian, and Turkish cuisines. With the Ottoman rule of Iraq, influences of Turkish cuisine also became incorporated into Iraqi recipes (and vice versa).
Furthermore, as the rest of Iraqi history, the Iraqi cuisine has been deeply influenced by its fertile land between its two rivers Euphrates and Tigris.[1] This influence is seen in Iraq's national dishes. 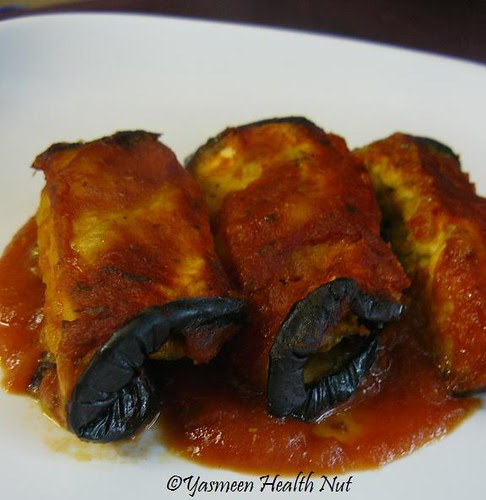 The wraps turned out to be one of best tasting eggplant appetizer.Usually made with minced meat ,but one can also stuff with vegetable like mushrooms or with tofu and flavor up with choicest spices.
Recipe
Makes about 12 pieces
Ingredients:
1 large eggplants
1 tablespoon Olive oil

Direction:
Trim off the top and bottom of the Egg plant. Place eggplant slices on baking sheets lined with foil and brushed with oil. Bake in the oven at 350 degrees for approximately 20-30 minutes until brown, turning the eggplant halfway.
If using meat stuffing
Mix together the ground meat, onion, spices,salt and pepper. Divide the meat into sausage shaped portions 1" thick and 2" long. Place a portion of the meat stuffing at one end of an eggplant slice and begin wrapping the eggplant around it. 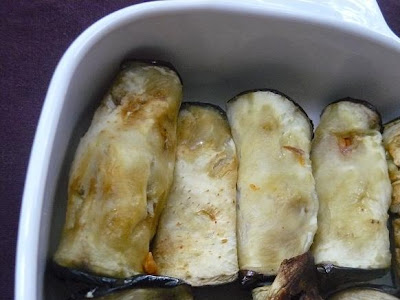 If using Vegetarian Stuffing
Heat oil on medium high heat in a pan and saute the vegetables with garlic and spices for about 5-6 minutes until soft,season with salt and pepper.let cool for a minute or two.place the about a tablespoon of stuffing ,sprinkle cheese on the eggplant slice and wrap it. 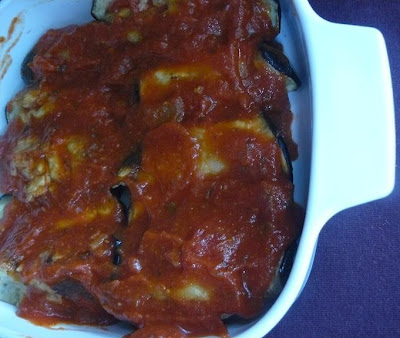 Place the rolls in a baking dish and layer the tomato slices on top (optional).
In a saucepan heat 2 tbsp oil and saute the diced onions. When soft add the chopped tomatoes, salt, pepper and turmeric. Add tomato sauce, stock and lemon juice to taste. Cover and simmer 15 minutes.
Pour the sauce over the rolls in the baking dish, cover with aluminum paper and bake for about 40 minutes at 375 degrees for meat stuffing or 30 minutes for vegetables stuffing. 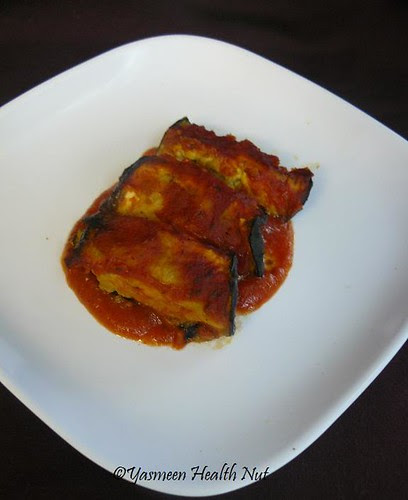 Sweet and nutty,these morsels make a nutritious dessert after a spicy meal. 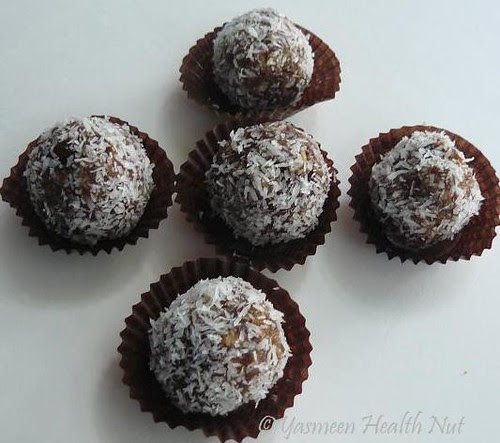 Add dates, ½ cup sesame seeds, and tahini in the food processor. Pulse and add the walnuts and spices; pulse again. Take the mixture out and make small balls and roll them in toasted sesame or shredded coconut. 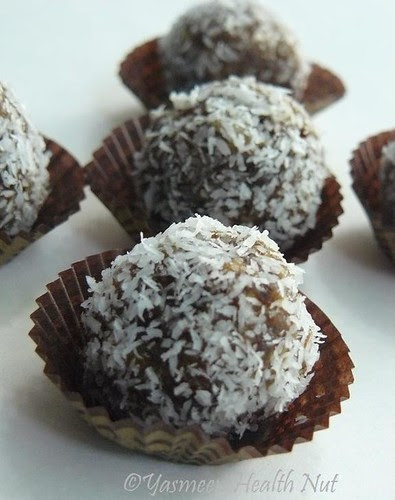 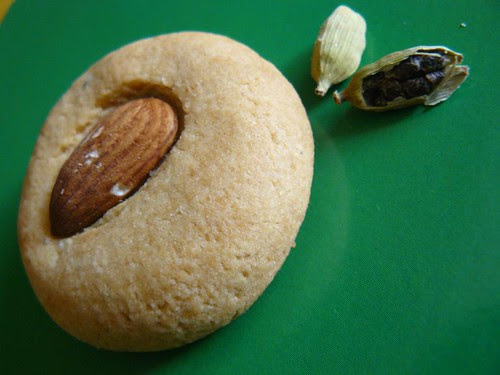 Beat the butter in a bowl for 3 minutes. Add sugar and beat the mixture until becomes light in color. Add flour, cardamom and salt gradually. Use your hand to mix the cookie dough. Take a small piece of dough the size of walnut. Shape the cookie and place and almond in the middle. Arrange on a tray with parchment paper or silicon pad. Bake for 20 minutes in 350 degree oven. 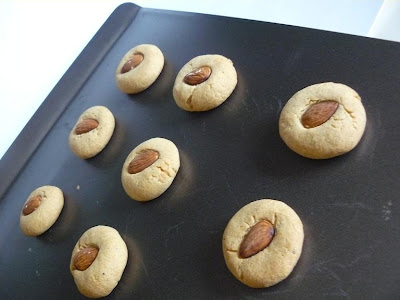 Faiza Ali said…
All the three dishes look Yummy and perfect. I just made cookies and date balls. Have to post them soon.
August 31, 2009 at 6:53 AM

Gita Jaishankar said…
Iraqi cuisine is very new to me...does have some interesting flavorful combination...that sure makes a lovely and delicious lunch :)
August 31, 2009 at 8:10 AM

Anonymous said…
Thank you Yasmeen for such a LOVELY lovely post.It is a delight to learn about the Iraqi cuisine,and such exquisite picks!Absolutely delicious..Ive seen the Eggplant wraps while I was in Turkey but never knew exactly how to do them,thank you for this aswell as for the vegetarian version!Shukran! Mia
August 31, 2009 at 8:17 AM

Aparna Balasubramanian said…
Those date and walnut balls look delicious. Should try this. Ramzan greetings.
August 31, 2009 at 9:56 AM

Anonymous said…
Thanks so much for introducing us to Iraqi cuisine! The eggplant wraps sound fantastic and so do the sweets!
August 31, 2009 at 10:48 AM

mona said…
Yasmeen, each one of those preparations look outstanding and extremely yummy. Jazakallahu khairun for sharing. Bookmarked it to try.
August 31, 2009 at 10:59 AM

in the last two weeks or so,I didn't really manage to check many blogs,so I missed the fact that it was your birthday.I really want to wish you everything good for yourself and your family.May Allah bless you in every possible way!
Come...let mu give you a hug =)!
Oh,and thanks for the recipe from the previous post.I've always thought of the Dobos Torta as something very elegant and so old Europe.
Thanks also for the eggplant recipe.I just love eggplants :)!
And,last but not least:Happy Ramadan my sweety!
XO
August 31, 2009 at 2:29 PM

sangeeta said…
all three recipes are so good.
i make the date balls slightly differently , eggplant wraps look so interesting.
August 31, 2009 at 10:05 PM

Indian Khana said…
Those pics are to tempt us rite? Looks delicious wow...love all and the eggplant wraps..yum..inbtw tried your bread bowl..though I didnt made the bowl but the bread was too gud...my first trial of bread baking...thanks dear for sharing the wonderful recipes
September 1, 2009 at 7:07 AM

OMG.... Gorgeous Posting , and awesome photos my dear... you did an excellent job .... the eggplant looks so delicious and your cookies amazing...
thanks for participating and sharing
September 1, 2009 at 8:50 AM

saffronapron.blogspot.com said…
All wonderful. I love those cookies. Cute as a button.Love clubs like this.Good to know more abt international cuisine.
September 1, 2009 at 10:18 AM

Kerstin said…
Oh wow, I don't know where to start - it all looks SO good! Cardamom is one of my favorite spices so I know I'd love the cookies and the eggplant rolls look amazing!
September 1, 2009 at 4:37 PM

sabah said…
I only mad the date balls, because I posted both of the other recipes earlier.
Your three dishes look great. Too bad that you can not send more than pictures through e-mails.
September 2, 2009 at 7:04 AM

Anonymous said…
Very Good support by you
i really Appreciate
your efforts
Good Health care Tips
September 5, 2009 at 10:07 AM

Ann said…
Thanks for stopping by my blog. I just discovered Waalima cooking club on your site - looks like fun and so informative. I had to try these eggplant wraps - they were so delicious!!!!!Huge hit for dinner tonight!
September 5, 2009 at 9:06 PM

Mimi Cooks said…
Thanks for sharing your Walima challenge...your photos look great and i am sure the food tasted great too. Have a wonderful night.
September 8, 2009 at 1:21 PM

ishikavarma said…
It is very important to have good thoughts in mind to write a beautiful post and your mind seems very clear only then you have written such a beautiful post, it is worth praising on this post, the amount of praise this post will be less.
Bhiwadi Escorts
Escorts in Sector 16
Noida Call Girls
call girl gurugram
September 26, 2020 at 12:04 PM