I love variety in breakfast,with time to spare and recipes in hand,why not make every breakfast an extraordinary one.On breakfast menu today are Latkes, traditionally prepared on Hanukkah,these are the crisp deep fried potato pancakes.I give them a low calorie make over without using eggs,frying in least amount of oil on stove-top or even better baking and casting the white potatoes with some vibrant vegetables to enhance the flavor and nutrition.

Method
Combine all the grated vegetable in a large mixing bowl.Add flour,season with salt and pepper and stir to distribute evenly.
Heat about about 2 teaspoon of oil in a large non-stick pan or cast iron pan over medium heat.Carefully place about a tablespoon of the vegetable mixture on the hot oil and flatten a little using a spatula.I fried 6-7 at a time in the large pan.Flip after 4-5 minutes until golden brown and repeat on other side.Strain any excess oil on a paper towel.Add about a teaspoon of oil for each batch of latkes.Finish making the latkes with rest of the mixture.Keep warm in oven.Serve with Fat-free sour cream and Cinnamon apple sauce on side.

Baked Latkes
Spoon the vegetable mixture on a lightly greased baking sheet and flatten them a little.Spray a little cooking spray over each of them and bake at 375 oven for 15-20 minutes until the top is crisp and golden brown on top. 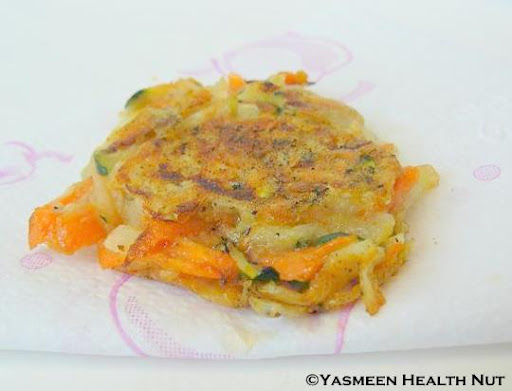 To make Cinnamon Apple Sauce for 3-4 servings.
Peel, core and chop 4 Macintosh or Granny smith apples.Cook them with a cup of apple cider,1/2 teaspoon cinnamon and 1/4 teaspoon lemon zest until soft and mushy about 30 minutes.Puree for smoother sauce. 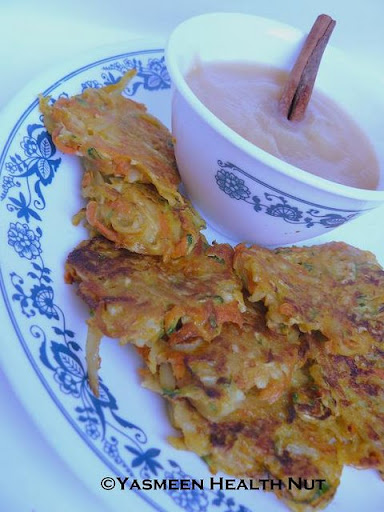 motherrimmy said…
They really do look delicious. I've saved this recipe. I love that they are healthy for me too!
December 14, 2009 at 8:38 PM

Kanchan said…
Happy Hanukkah ! Beautiful n healthy
Latkes, I have seen these recipes recently would love to prepare them !
December 14, 2009 at 9:05 PM

Anonymous said…
I'm so happy that you wrote about Latkes,because in these days I've been hearing about them,but I didn't know what they were.Sounds very delicious :o)!
December 15, 2009 at 3:36 AM

Gita Jaishankar said…
Love your healthy makeover for the latkes...I can finish off that whole plate without guilt :)
December 15, 2009 at 5:54 AM

Anonymous said…
I love your healthier version of latkes! Yummy with cinnamon apple sauce!
December 15, 2009 at 6:21 AM

Jessica said…
My mom used to make latkes regularly.thanks for the lower calorie make over!
December 15, 2009 at 6:33 AM

Finla said…
Oh if this is what you serve for breakfast i am comming over there every morning. Looks crunchy delish.
December 15, 2009 at 7:24 AM

SE said…
only came to know about latkes here..otherwise back home we use to prepare these during fasts..
December 15, 2009 at 7:25 AM

PJ said…
baked latkes sound absolutely delicious and a nice take on the old ones! beautiful click too!
December 15, 2009 at 8:11 AM

Unknown said…
Smart eating.Always good to reduce the fats and add more color to food.
December 15, 2009 at 9:43 AM

Azita Mehran said…
I love potato pancakes and I'm going to try making them with no eggs next time. I like the zucchini, carrot and sweet potato combination. Delicious!
December 15, 2009 at 11:12 AM

Chef Jeena said…
So delicious Yasmeen, all my favourite veggies too mmmmmmmm.
December 15, 2009 at 2:26 PM

Fresh Local and Best said…
Those latkes look delicious. I've never seen them made with other vegetables, but I think it makes them that much better! :)
December 15, 2009 at 3:06 PM

Unknown said…
These are one of my favorites, they look absolutely delicious.
December 16, 2009 at 8:20 AM

Kerstin said…
I love that you lightened them up and added in such pretty veggies!
December 16, 2009 at 8:11 PM

Anonymous said…
First off, your photography is breathtaking, and I can almost taste these amazing looking latkes! Secondly, I want to know if I can come over and eat all of your food? LOL Great blog!
December 19, 2009 at 1:04 AM

CurryLeaf said…
Never tried sweet potatoes in my latkes/rosti.Looks perfect and hearty Y.Love to try the cinnamony sauce especially.
December 19, 2009 at 3:28 AM

Sunshinemom said…
On my mind now! I have been wanting to try latkes without egg for sometime now. Yours look delicious!