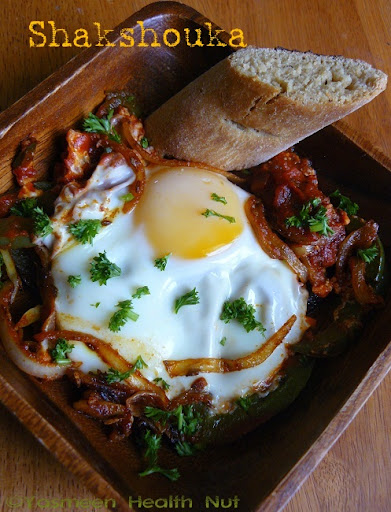 March was Tunisian Special in Walima Cooking Club.Beautiful small oasis along the Mediterranean African coast,Tunisia has immense diversity in both food and culture.The cuisine is a pleasing potpourri of flavors influenced by the neighboring African and European cuisines.
Recipe : Tunisian Shakshouka(chakchouka)
An absolute scrumptious Egg dish,Shakshouka is a well-known breakfast meal in North Africa.Eggs are poached in a simmering sauce,with medley of vegetables.Tunisians love spice,the heat in this dish is dominated by hot harissa.For variation,eggs can be replaced with different kind of animal or plant protein or made just with vegetables like the ratatouille.
Complemented with a crusty home made bread,the whole grain french baguette was the best match. 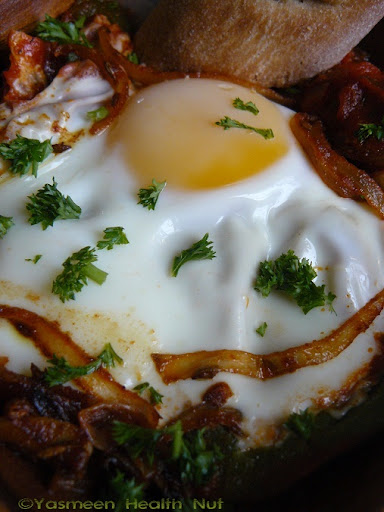 Method
Heat the oil in a deep skillet over medium flame. Stir in the cumin seeds, paprika and cook slightly to color the oil, about 10 to 15 seconds. Add the onions and garlic and sauté until the onions are translucent and wilted but not browned, about 5 minutes.

Add the tomatoes and cook for 3 to 4 minutes to reduce down a little bit. Add the peppers,harissa,1 cup water and salt and pepper and bring to a boil. Reduce the heat to low, cover and simmer for about 10 minutes. Add more water as needed to keep it from drying out.

Using a spoon, form four small indentations in the simmering peppers to hold the eggs. One by one, crack the eggs into a small bowl and slip each from the bowl into an indentation. Cover and simmer for another 10 minutes or so until eggs are cooked through. 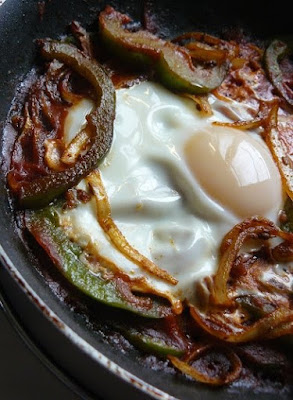 Variations
Add a few olives and capers and eliminate the eggs. 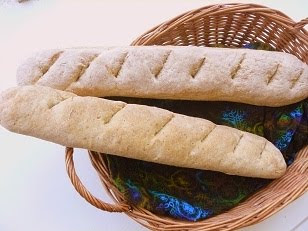 Method
Dissolve the yeast in warm water and allow the yeast to rise and get frothy, about 10 minutes.In a large bowl combine the flour, salt and oil. Add the yeast mixture and knead until well combined and smooth.Apply some more oil on the sides of the bowl cover and allow to rise until double it size about 2-3 hours.
Preheat oven to 400F.
Punch down the air from the dough.Knead for a minute.Then divide the dough in to 4 equal portions.Roll each in to long rectangular shape place on a greased baking sheet,make deep diagonal slashes across loaves,cover with a kitchen towel and proof for another 30 minutes by allowing to rise one last time before baking
Bake for 15 to 20 minutes until golden brown on top.Let cool completely before slicing with serrated knife.Great for dipping in soups and stews.Also makes hearty crusty sandwiches.
Bread Breakfast Eggs Iron Rich Mediterranean Diet Peppers tomatoes Walima Club

Cool Lassi(e) said…
That spread looks splendid! Love the mouthwatering sides and the crusty bread. Yum Yum!
March 29, 2010 at 8:23 AM

Rosa's Yummy Yums said…
That is a dish I really like! That shakshouka looks tasty and the baguettes are fabulous!

Joanne said…
I love Tunisian food and though i've never had shakshouka, from what I can tell, I would love it. You make it look so rustic and appealing!
March 29, 2010 at 11:04 AM

Simplyfood said…
What alovely combination and the bread looks so crusty and golden brown.Nice presentation too.
March 29, 2010 at 1:37 PM

Hamaree Rasoi said…
Awesome!! Love the look of the egg....edges crispy and soft in the center...Lovely Presentation
Deepa
http://hamareerasoi.blogspot.com/
March 29, 2010 at 10:01 PM

Unknown said…
Eggs are must in my breakfast.The shakshouka sounds easy enough to make often.
March 30, 2010 at 7:06 AM

Your shakshouka looks splendid! I would love to devour one this morning as I am contemplating what to do for lunch!
March 30, 2010 at 7:45 AM

CurryLeaf said…
It looks exquisite.Love the addition of capers and avoiding eggs.Great meal this makes Yasmeen
March 30, 2010 at 8:02 AM

Arlette said…
Yasmeen
you rock, shakshouka and fresh bread ... wow. Your plate looks so delicious and appetizing, specially for someone who doenst eat lots of cooked eggs.
I truly feel hungry now looking at the plate and fresh bread...
Great posting my friend
March 30, 2010 at 11:00 AM

Faith said…
This is really beautiful with the egg on top! Your homemade baguette looks incredible, I love that it's whole wheat!
March 30, 2010 at 3:27 PM

Linn @ Swedish Home Cooking said…
I'm just about to have breakfast, and yes, I would kill for that breakfast. Sounds super delicious.
March 31, 2010 at 12:41 AM

Dershana said…
now, that is a doable recipe, yasmeen :-)looks really good with all that tomato and onions fringing the poached egg!
March 31, 2010 at 1:49 AM

Hungry Passport said…
This looks like a great alternative to eggs florentine--I get a little spinached-out sometimes. Tomatoes and North African spices.....mmmm.....