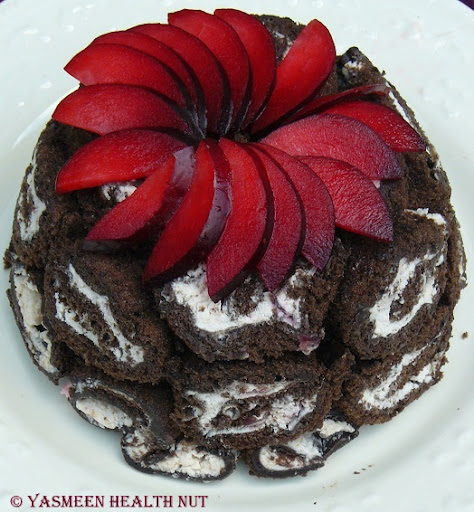 The July 2010 Daring Bakers’ challenge was hosted by Sunita of Sunita’s world – life and food. Sunita challenged everyone to make an ice-cream filled Swiss roll that’s then used to make a bombe with hot fudge. Her recipe is based on an ice cream cake recipe from Taste of Home.

I wasn't expecting to complete this month's magnificent challenge, with all the summers busy schedules and the prep for vacation.As matter of fact I could not entirely finish the challenge,I started putting together the daring bake at the nth hour.This was a do or die ,any mistakes ,I had absolutely no time to redo the challenge.Everything went well as one see the pretty result,but due to lack of time I could not put together the second batch of ice cream to make the layers of different flavors(i.e the bombe effect),the only ice cream filling was the home made vegan plum ice cream.Nonetheless the ice cream was still every bit delicious,with the spongy chocolate Swiss rolls and fruity ice cream 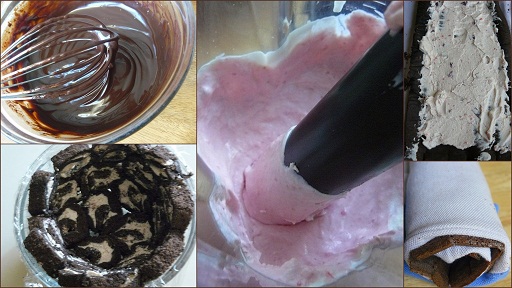 Thanks to Sunita's extensive pictorial recipe , the challenge was clearly understood.The neatly wrapped Swiss rolls are a really beauty,to get the spongy texture you have beat the eggs to the right consistency of airiness.You can play around with the flavors of the rolls , plain vanilla , chocolate,dried ground berries or matcha. 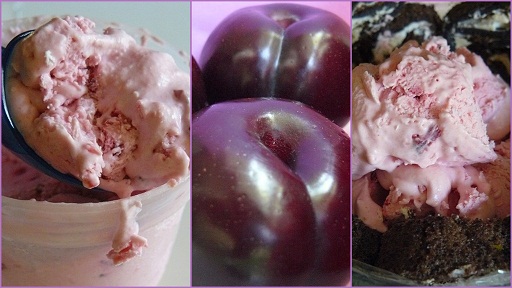 This has to be the summer I indulged in most home made ice creams.The vegan plum ice cream might just be the last of the season,the fresh plums not just impart prettiest pink color but also a nice sweet tart flavor to the ice cream.If you are watching for those fat calories use different layers of fruit sorbet instead and replace the cream filling in the rolls with fruit preserves.

Method
Bake the cake
1. Pre heat the oven at 200 deg C /400 deg F approximately. Brush the baking pans ( 11 inches by 9 inches ) with a little oil and line with parchment paper. If you have just one pan, bake one cake and then let the pan cool completely before using it for the next cake.
2. In a large mixing bowl, add the eggs and sugar and beat till very thick; when the beaters are lifted, it should leave a trail on the surface for at least 10 seconds.
3.Add the flour mixture, in three batches and fold in gently with a spatula. Fold in the water.
4.Divide the mixture among the two baking pans and spread it out evenly, into the corners of the pans.
5. Place a pan in the center of the pre heated oven and bake for about 10-12 minutes or till the center is springy to the touch.
Roll ,unroll and roll the cake
6. Spread a kitchen towel on the counter and sprinkle a little caster sugar over it.
7. Turn the cake on to the towel and peel away the baking paper. Trim any crisp edges.Starting from one of the shorter sides, start to make a roll with the towel going inside. Cool the wrapped roll on a rack, seam side down.Repeat the same for the next cake as well.
Prepare the cream filling
8.In a large bowl, add the cream beat till very thick,mix in the plums.
9. Divide the cream mixture between the completely cooled cakes.Open the rolls and spread the cream mixture, making sure it does not go right to the edges (a border of ½ an inch should be fine).
10.Roll the cakes up again, this time without the towel. Wrap in plastic wrap and chill in the fridge till needed, seam side down.

Recipe :Vegan Plum ice cream
The ice cream is made without an ice cream maker.

Method
Dissolve the agar-agar or gelatin in 2 tablespoon of hot water.
In a small sauce pan,add the oil, plums and sugar and let cook until soft and bubbly about 10 minutes,add the dissolved agar-agar mixture 3-4 minutes before turning off the heat.Cool.
Transfer the plum mixture in a blender,add the coconut milk,agave nectar and blend until smooth.
Pour into a freezer friendly container and freeze till firm around the edges. Remove from the freezer, beat till smooth and return to the freezer. Do this 3-4 times and then set completely.

Method
1. In a small saucepan, whisk together the sugar, cocoa powder, cornflour and water.
2. Place the pan over heat, and stir constantly, till it begins to thicken and is smooth (for about 2 minutes).
3. Remove from heat and mix in the butter and vanilla. Keep aside to cool

Assembly
1. Cut the Swiss rolls into 20 equal slices ( approximately 2 cms each ).
2. Cover the bottom and sides of the bowl in which you are going to set the dessert with cling film/plastic wrap.
3. Arrange two slices at the bottom of the pan, with their seam sides facing each other. Arrange the Swiss roll slices up the bowl, with the seam sides facing away from the bottom, to cover the sides of the bowl. Cover the bowl with plastic wrap and freeze till the slices are firm (at least 30 minutes).
4. Soften the Plum ice cream. Take the bowl out of the freezer, remove the cling film cover and add the ice cream on top of the cake slices. Spread it out to cover till the half of the bowl. Cover the bowl with plastic wrap and freeze till firm ,3-4 hours.Add the fudge sauce over the ice cream, cover and freeze till frozen 6-8 hours.
Keep the cake out of the freezer for at least 10 minutes before slicing, depending on how hot your region is. Slice with a sharp knife, dipped in hot water.Serve with some fresh plum slices on side. 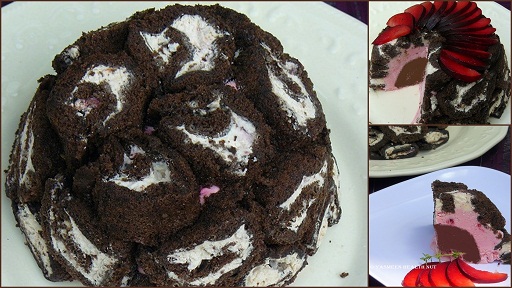 Ruth H. said…
Beautiful! I love that you made the vrgan ice cream! I tried, but my results weren't as creamy as I would have liked... Something to work on, I guess...!
I love your use of fresh ingredients. Very inspirational!!
July 27, 2010 at 5:12 AM

Joanne said…
This is one seriously ornate ice cream cake! I love the homemade plum vegan ice cream...amazing.
July 27, 2010 at 6:08 AM

Asha @ FSK said…
Oh! I love your ice cream! I am curious how the flavor of coconut milk expresses in the ice cream. Does it leave a distinct coconut flavor?
July 27, 2010 at 7:03 AM

Yasmeen said…
Thanks you everyone.
Asha,I thought the same when I made my first vegan ice cream.But trust me it tastes almost as good as the real dairy cream ice cream.
July 27, 2010 at 7:27 AM

Jeanne said…
Your cake looks wonderful! I love the color of the plums, and I'm sure that the vegan plum ice cream tastes heavenly!
July 27, 2010 at 7:36 AM

Renata said…
I must try the plum ice cream! I'm not sure I can get such nice ones here in Brazil, though. Love your decoration! Thanks for stopping by my blog!
July 27, 2010 at 7:45 AM

shelley c. said…
Wow - I bet you could totally fool some non-vegans with that dessert and let them see how amazing vegan choices can be. Truly impressive results, and the presentation is fantastic, too.
July 27, 2010 at 8:03 AM

Sayantani Mahapatra Mudi said…
that was a real challenge and you did a superb job!and look at the end result. it was satisfying and evilishly delicious. wish I could have grabbed a piece too.
July 27, 2010 at 9:54 AM

The Betz Family said…
That looks beautiful! I love the contrasting plum with the dark chocolate color. The flavors sound amazing. Nice job on the challenge!
July 27, 2010 at 10:11 AM

anudivya said…
This is the most beautiful I have seen so far! You have TONS of patience and creativity... even that plum slices arranged on top of the cake looks divine!
July 27, 2010 at 10:27 AM

"Guppy" Honaker said…
Yasmeen - you have the BEST recipes on this blog! Now, the Swiss Swirl Plum Ice Cream Cake looks like a lot of effort. But I think the end result will be yummy!

Lisa said…
Your bombe is gorgeous and the plum decor on top is just stunning. Love love love the whole plum motif..especially that filling! Beautifully done!
July 28, 2010 at 2:38 AM

Nachiketa said…
plums.. what a delight....
Looking so good with the garnish...

Aparna Balasubramanian said…
PLum cream sounds perfect. I really like how you always manage to use seasonal fruit in your desserts and keep them healthy too.
July 28, 2010 at 10:21 PM

Fresh Local and Best said…
I simply love the way the the plum slices are draped over this magnificent cake. It looks like red velvet!
July 31, 2010 at 7:50 AM

SS blogs here said…
Hey Yasmeen.. looks like I have missed quite a few posts past few days.. This cake is just fabulous! Best wishes!
August 27, 2010 at 8:07 PM

The meaning of this is that you actually get rid of fat by eating Coconut Fat (in addition to coconut milk, coconut cream and coconut oil).

These 3 researches from big medicinal magazines are sure to turn the traditional nutrition world upside down!
May 3, 2017 at 6:15 PM